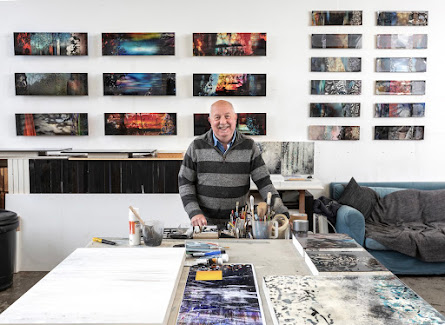 Terry Shave was educated at Ipswich School of Art, Loughborough College of Art and the Slade School, London. He has an extensive track record as an artist and arts educator. Born in Suffolk, he now exhibits regularly both in the UK and abroad. His one-person exhibitions include, ‘Loaded’ at the Ikon Gallery, Birmingham;  'Reloading' at Real Gallery, New York and ”Closer than you Think” at the Bonington Gallery Nottingham. He has been included in nearly one hundred and fifty mixed exhibitions; these include The World Artists Festival in Seoul and The Presence of Painting in Sheffield. He has won prizes in the John Moores painting exhibition in Liverpool and the Unilever Award in London. He has also curated exhibitions that explore drawing, museum collections and contemporary painting in the UK. He is represented in The National Collection with work in museums and the Arts Council Collection.

Terry Shave is Emeritus Professor of Fine Art at Nottingham Trent University. He has initiated and developed a significant range of arts projects both nationally and abroad. These particularly focus on location specific intervention work that attempts to use art to explore socio-political and historical interpretations of sites. He was a founder member of UK Young Artists, a young artists support agency based in the East Midlands. This produced the first World Event Young Artists in Nottingham in September 2012. He is an active supprter of artist led galleries and studios and is a board member and advisor to Backlit in Nottingham and AirSpace in Stoke-on-Trent.  He is currently a Director of DUST Rising, an artist-led support group in Staffordshire

Photo of the artist in his studio by Zute Lightfoot and Jason Garcia on behalf of ACAVA.

Link to a live BUNKA talk and interview with the artist.